Industries are also slowly increasing involvement in the overall production process, from innovation and R&D to production. For instance, Chinese toy manufacturers have progressed to becoming brands in their own right, stepping away from contract manufacturing 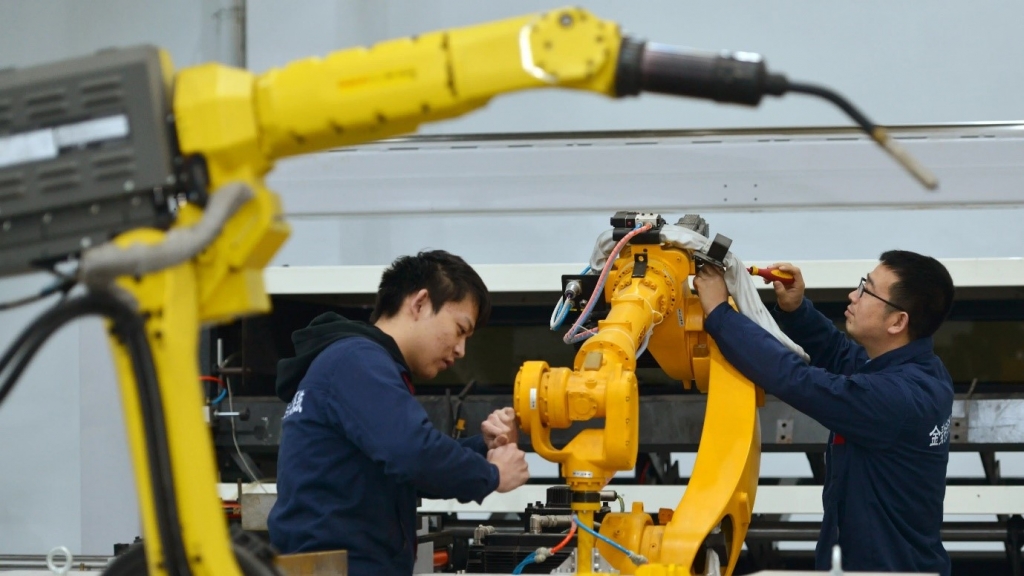 China’s reputation as a manufacturing hub has not always been favorable and the country has been striving to shed these negative perceptions with demonstrable success at both local and global levels.  Many local middle-income consumers now prefer China-made items to their imported counterparts. In 2011, local consumers’ perceptions of domestic electronics manufacturers were not kind, regarding them as little more than cheap, low-quality impostors. This changed by 2015. Eight of the top-ten smartphone brands sold locally were Chinese, with Huawei and Xiaomi in the top spots.

Globally, China is beginning to be seen as a credible source of technological goods. The increasing quality and technological expertise is evident in the change of the country’s export makeup. In 1995, Machinery and Electronics made up only 18.6% of total exports. This increased to 29.25% in 2000, and reached  43.34% in 2017. Chinese brands made the top ten list of smartphone brands worldwide in 2018 with Huawei was ranked at number three, shipping 152 million units worldwide.

In 2014, various reports found that China’s underground water, groundwater, and soil were all contaminated. In the same year, China passed amendments to a national Environmental Protection Law (EPL). The Revised Law aimed at cracking down on polluting textile factories, as well as imposed stricter obligations to pollution prevention and control on all other enterprises. Both local and multinational companies could be fined or convicted for failure to comply.

By the end of 2016, provincial and city-level authorities investigated a total of 647,000 construction projects involving environmental violations and rectified 618,000 (95.6%) of them. Furthermore, there are now 559 judicial organizations specializing in environmental resources-related cases. In just two years (2014-2016), the People’s Court heard over 300,000 such cases, 2.5 times the combined number of cases during the ten-year period of 2002-2011 (Source).

In 2017, a China Water Risk survey found that while manufacturers are on the way to becoming green, the journey comes at a significant sacrifice. Out of the 85 textile manufacturers surveyed, over 50% have spent more than 2M RMB to comply with new standards and 81% have plans for future investments. 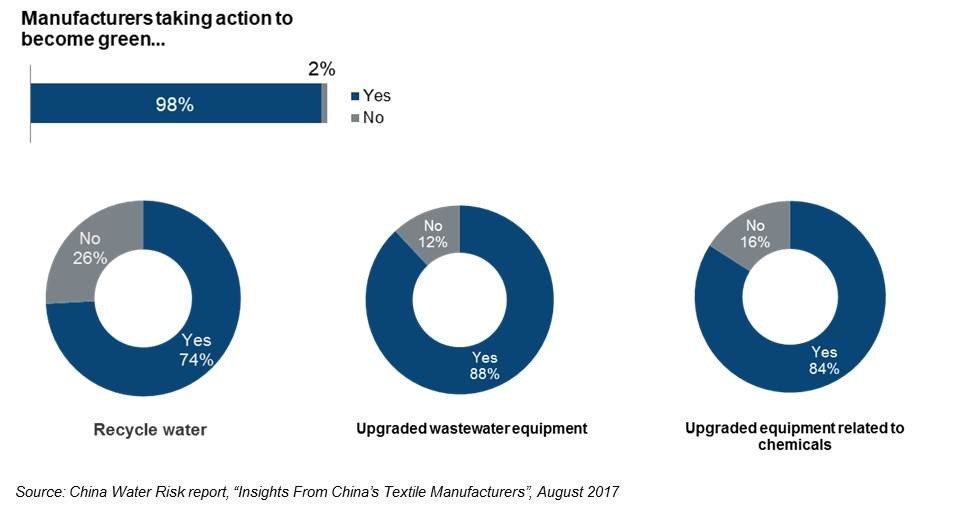 They are shouldering the costs of going green while still maintaining a low-price model, placing huge financial pressures on smaller businesses that lack support from brands or the government. That year, officials in more than 80,000 factories were reprimanded, fined, or charged with criminal offenses and entire industrial regions were temporarily shut down in a bid to push manufacturers to comply with updated environmental standards.

Besides enacting stricter laws and regulations on manufacturing, the Chinese government has also developed a campaign aimed at changing what the world thinks about its exports. Launched in 2015, Made in China 2025, aspires to comprehensively upgrade and modernize the Chinese industry, eradicate pre-conceived notions of inferior quality levels and re-define China as a high-end manufacturing power.

The Cheung Kong Graduate School of Business’ (CKGSB) analysis of initiative reveals the country is still lacking in terms of core technology and innovation. Currently, domestic content is comparatively low for high-tech products, with foreign content comprising more than 50% of these products on average. In certain categories of goods, such as high-level hydraulic components, China is almost entirely dependent on foreign production. Made in China 2025 hopes to transform China from the world’s largest manufacturer to the strongest, establishing more independent local industries. 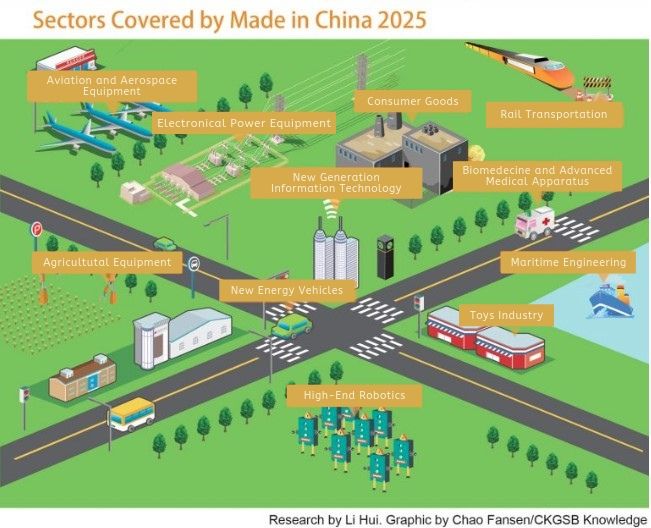 In order to become a globally trusted manufacturing hub, China must also keep up with ever-changing international export standards including stricter regulations and specific guidelines and constraints from each global market. Quality control testing doesn’t just focus on whether a product complies with safety regulations. It also determines if goods are fit for use and performing as expected by the end user. A detailed assessment of a product’s longevity helps suppliers enhance product designs, services, and customer satisfaction. Furthermore, labs can benchmark products from different suppliers and develop a broader view of particular industries.

Another key aspect of quality control standards is the auditing of any factory or manufacturing plant. An assessment must determine that the facility has the appropriate equipment required for production and that the machinery and tools are properly calibrated and adequately maintained. In addition to controlling pre-production and production sampling tests, pre-shipment tests are also crucial, ensuring that the shipped product is the same as the one that was expected and ordered.

Over the years, stringent testing protocols, brought about by a focus on customer safety and satisfaction, have improved the country’s manufacturing processes.

Take the production of toys as an example. The manufacturer or importer of Chinese-made toys must ensure that all products are compliant with its destination market’s safety regulations, which are extremely strict because the end users are children.

In the United States, the Consumer Product Safety Improvement Act (CPSIA), overseen by The Consumer Product Safety Commission (CPSC), regulates all imported toys and children’s products. If the items are destined for the European Union, they must bear the CE mark, proving they meet the European Toy Safety Directive (2009/48/EC) and have passed the EN 71 standard for mechanical, chemical and inflammability testing.

Independent testing remains the best strategy for China to build trust and protect both itself and consumers. The result of competent quality controls and testing procedures is that more high-quality goods are making it out of China and into the international market.

Made in China to Made by China?

China is quickly becoming more than just a manufacturing hub but also a place for technological innovation. A progression that is evident in the country’s increasing contribution to the world of electronics and machinery and move up the value-chain, with Chinese brands becoming recognised in their own right at both local and global levels. The country’s steps to becoming environmentally friendly also gives manufacturers a competitive edge among increasing environmentally-conscious brands and consumers.

Besides this, with wages and rents steadily rising in China, ASEAN countries are becoming more favorable choices for brands. A report found that the average cost of factory labor in China is $15-18 a day. It is $7 a day in Vietnam and $9 in Indonesia. Thus, upgrading its manufacturing capabilities is crucial if China wants to stay ahead in the competition.

While these changes have come at a price, the Chinese market continues to grow. In 2015, consumer spending increased by approximately 13 percent, compared to a 7 percent growth in GDP.

According to the European Commission’s Rapid Alert System, the number of EU-based alerts on clothing, textiles, and toys manufactured in China are steadily declining year-on-year, from 694 alerts in 2013 to 540 in 2016. While certain ideas around the ‘Made in China’ label may take some time to change, the reality is that Chinese products are greatly improving in quality. With its recent efforts to revamp the nation’s manufacturing sector, there’s no reason to believe that this trend won’t continue.