Sparkling Christmas decorations appearing in shops and workplaces is a sure sign that the holiday season is just around the corner.

A consumer survey by the U.S. based Electrical Safety Foundation International reported 86 per cent of Americans celebrate the season by decorating their homes.

The first decoration you typically purchase is a Christmas tree. In the U.S., over 20 million artificial trees are sold each year. Given the fact it’s the centerpiece in your home during the holiday months, it’s worth spending a few minutes to better understand your tree’s safety features.

In order to guarantee your family’s safety an artificial tree can undergo up to 20 tests. These tests take place either through products inspections directly in the factory or through testing in specialized laboratories. So, what are they testing? Regulations and testing standards have been designed around three main safety issues: fire, injury and poisoning risks.

1. How is the risk of fire controlled before your tree enters your home?

Taking into account that in the U.S., Christmas tree fires cause around $U.S.14.8 million damage annually, the potential for fire during the holiday season is a genuine issue.

In fact, the risk of Christmas tree flammability is so critical that it’s one of the most regulated home decoration items on the market. In the EU for example, artificial Christmas trees must comply with the same regulations set in place for toys. And toys fall under one of the most stringent product categories because of the direct relationship with children. This is particularly pertinent for flocked trees which pose the biggest risk of catching fire.

Whilst this test is common, it is not legally required. In Europe, it is only France that has specific regulations regarding Christmas tree safety (trees with dangerous sharp points at the end of the pines are strictly controlled).

EN 71-2:2011 +A1:2014 is the European Standard that gives requirements concerning the flammability of toys. The number “2” is the specific part of the referral standard which is directly related to flammability. It sets safety requirements for toys that could pose a significant risk of injury to a child, and assesses the potential of the item to catch fire.

An artificial tree that meets this requirement has to go through different testing. These tests are standardized and must reproduce specific conditions in our daily lives. It’s worth noting that any artificial trees sold in Europe, regardless of where they’ve been tested, should all be subject to the same analysis.

Here’s what happens in flammability testing: 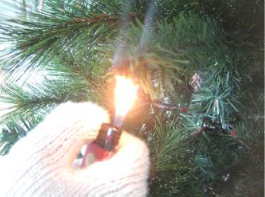 The issue is taken so seriously that even after all the products have being manufactured, a sample is randomly extracted and submitted to a destructive burn test. Effectively, that means the manufacturers and the buyer agree to sacrifice some units to make sure their Christmas tree will not catch fire.

Safety standards are even higher for trees coated with artificial snow or frosting which can create additional fire risks. These products are evaluated according to the recommendations of the Consumer Safety Commission (1993). 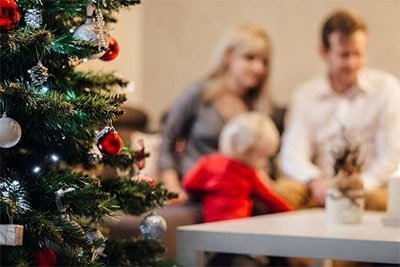 2. Have you ever thought about the injuries a Christmas tree could cause?

Unwittingly, fun and festive decorations can also be hazardous. On average, there are 200 decorating-related injuries per day each year. In 2017 alone, about 18 thousand people were treated in emergency rooms because of this.

Even if there was nothing required by the EU in terms of preventing injuries from Christmas trees, France has established its own norm, NFS 54-200. It requires that:

Stability is also critical and most importers ask third parties to execute some additional tests that go beyond the standard regulation requirements. A tree will pass the test if it doesn’t tip over when placed on a six-degree incline.

Some manufacturers go even further, requesting additional tests to check that there are no sharp edges and points, nor any small components that a child could easily detach and swallow (traction applied: 60N, equivalent to six kilos, which is significant).

In 2016, a recall was made by the European Commission after a luxury artificial tree presented with sharp points. Any tree that has a sharp edge is considered dangerous. If someone had fallen on the tree and made contact with its sharp metallic tip, it could have led to serious injury, particularly an eye accident. It was immediately discarded from the market.

3. Could your Christmas be toxic? 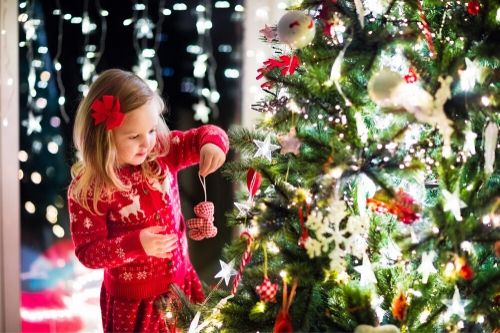 Surprisingly, the very elements making festive decorations so appealing, like bright colors, scents and sparkles are not necessarily safe. In 2014, a study of 69 seasonal holiday products found an astonishing two thirds contained potentially hazardous chemicals like leads and phthalates (esters or phthalic acid is used in plastic manufacturing).

A product such as glitter has a habit of sticking around long after festivities are over so it is worthwhile understanding what it may contain. The user should read all warning labels and make sure they follow manufacturers’ instructions. Similar reading can also be useful when using artificial snow. Children with allergies should resist touching or playing with it.

In the United States, there is a central regulation concerning chemicals: California Proposition 65. This compulsory warning applies if there are any chemicals contained that may cause cancer. If you see this warning on your Christmas tree, you should ask the retailer for more details.

In the European Union, two substances in Christmas trees are particularly monitored under the REACH regulation:

1) Cadmium – REACH Annex XVII which relates to coatings and plastic parts. Generally speaking, exposure to cadmium used in artificial trees would pose no harm but as its effects can be severe, it’s worthwhile knowing this chemical might be present.

2) Lead – REACH Annex XVII which relates to metal parts. Lead exposure can be very serious, even fatal so be vigilant about labeling and ensure limited contact with metal parts.

But consumers should be reassured by the fact that many chemicals are now regulated, prohibited and carefully checked.

And some manufacturers go even further and request that any painted surface or coating resist hand rubbing or soaking in water.

According to the CEO of API Lab, “each year, API Lab performs hundreds of tests on Christmas trees and decorations to ensure they meet quality guidelines. While Christmas comes only once a year, API Lab releases tens of festive decoration product reports every day, mostly between July and September. This inspections and lab testing help manufacturers and retailers raise their level of attention on this particularly sensitive item. As this industry is constantly submitted to great surveillance, potential untrustworthy suppliers are rapidly identified as suspicious and most of the time undergo audit to prove their reliability.”

For more information, you can also check the following public websites that register recalls: