Why you’ll never look at a candle in quite the same way again!

Why you’ll never look at a candle in quite the same way again!

Candles add extra sparkle to the way we celebrate our everyday lives. They can provide a sense of occasion and grandeur, romance and relaxation. But there’s more to these products than just colour and scent. Factors such as wax material, wick characteristics and soot emission are all important factors when it comes to assessing candle quality and safety.

Key data about the candle market

The use of candles around the home is becoming increasingly popular. EU consumption grew by 5 per cent in 2015, equivalent to every citizen purchasing 1.4 kg of candles in that year. Around 35 per cent of America’s $3.2 billion annual candle sales take place in the lead up to the Christmas season and U.S. candle manufacturers use more than one billion pounds of wax annually.

China is the world’s leading exporter of candles (U.S. $606 million). Surprisingly, the second largest global producer of candles is Poland (U.S. $588 million), selling almost double that of its nearest rival, the U.S. (U.S. $275 million), followed by Germany and the Netherlands (U.S. $209 million each).

A complex product that requires a real knowledge

According to the Product Complexity Index (2014), candles rank as the 689th most complex product traded, placing them ahead of even bicycles that are ranked at 872.

Candle waxes vary greatly. Waxes can be made from animal, plant or mineral fats. In Japan, for example, candles used for Buddhist ceremonies are made with vegetable bases and their wicks are thicker than western candles. Then there are natural beeswax candles and these have been used for hundreds of years. But today paraffin, a petroleum-based product, is the most commonly used wax for candle manufacturing, although many candles are created from a blend of products.

While many people think, wax is the most important element in a candle’s quality, it’s actually the wick that’s most critical. Wicks act like a pump, drawing liquid wax up to the flame to be burnt. And the bigger the wick the more fuel that will be drawn up. High quality wicks are made from braided, plaited or knitted fibres to encourage a slow and consistent burn. Twisted wicks are considered to be of lower quality.

During the burning process a candle will emit specific components and particles, such as soot. The soot emissions indicate if there’s incomplete combustion, which suggests a candle will emit higher levels of other hazardous materials e.g. dioxins or polycyclic aromatic hydrocarbons (PAH). That’s why it’s critical that a candle be manufactured with a quality wick to ensure it burns cleanly and uniformly.

Can you trust candle makers?

International industry standards help ensure each manufacturer produces candles that have passed safety, flammability, emission and labelling requirements. In the U.S., there are no mandatory federal labelling requirements for candles. However, the U.S. Consumer Product Safety Commission (CPSC) and Heath Canada expect products to be in line with industry consensus standards. These standards are defined by ASTM International, a global leader in the development of voluntary standards. In the E.U., some of these standards were defined in 2007 by the European Committee for Standardization.

Before entering your home, a candle may undergo anywhere from 10 to 20 tests. To avoid unexpected flammability, basic specifications are defined by the E.U. standard EN 15493:2007 (corresponding to ASTM standard F 2417-16).

In order to make it easier for consumers to understand the risks associated with candles, labelling is an efficient way for manufacturers and importers to inform and alert users. European standard EN 15494:2007 (corresponding to U.S. ASTM F2058-07) specifies that the product safety label must include a warning sign as well as compulsory safety information.

The container in which a candle is held is also important as it might be exposed to high temperatures when the candle is burning. But testing for heat resistance goes beyond just the container. Objects located close to a burning candle could catch fire or the container itself could break spilling hot wax. If the receptacle is glass, it must be heat-treated and its thermal resistance will depend on its thickness.

An interesting case in point was in the U.S. this month. The CPSC reported that certain menorahs (candlesticks) melted when the candles were burning which posed a fire hazard. This demonstrates the level of consumer protection in place. First with the U.S. ASTM voluntary standards and then the CPSC whose role it is to keep an eye on global consumers’ safety. They also shed light on bad quality products and warn of the hazards they could cause.

As a matter of fact, testing plays a vital role in business success for manufacturers, since delivering compliant products from the very beginning saves time and money.

Have you ever thought about what you were inhaling when you light or blow out a candle?

Since burning a candle involves emissions, regulatory bodies have also defined standards for soot. The test to detect the quantity of soot emitted by a candle consists of putting a glass plate above the flame for a defined period of time and measuring the transmittance of light through the darkened plate. This is expressed as a soot index. Standard EN 15426:2007 requires that for single wick candles with a diameter up to 100mm, the average soot index for three tested candles should be less than one per hour.

Air quality is also an important part of the testing process. This includes gauging the emission of volatile organic compounds (VOC). Those emissions are particularly important when it comes to monitoring scented candles, because substances like limonene and cinnamic aldehyde may be added to give candles their fragrance.

In fact, the fragrant candle market is massive. Around 10,000 varieties of scented candles are available in the U.S. As a result, extensive research has been carried out to determine whether chemicals created or released during the burning and snuffing out process could lead to potential human health concerns.

The control of VOCs is not mandatory but it is possible regulations will shift in the very near future.

In anticipation of these potential changes, some retailers are already specifying that candles must carry an additional marking indicating the scented candle contains allergenic substances, such as citronellol. This marking is to warn consumers that sensitive individuals should not be exposed to this fragrance to prevent allergenic reaction.

While there may be concern about the use of synthetic additives in candles, it’s important to note that reputable manufacturers only use expertly formulated fragrances specifically approved for candle use. As for pigment and dyes, these are also regarded as safe when used as intended and there are no known health concerns with colourants. 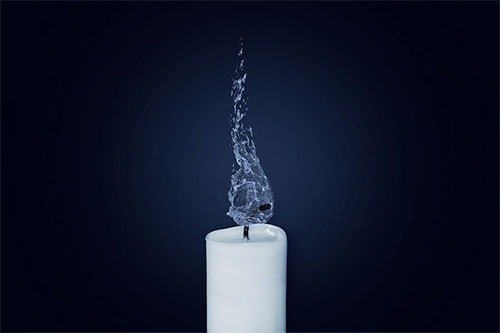 Tips for safer candle use at home

The CEO of quality control company API Lab, specialists in household goods testing, says, “there is no evidence that clearly attests that the quality of a candle is better when it is organic. Even naturally produced beeswax does not necessarily create a better candle”.

API Lab tests several hundred candles per year and it is reassuring that it remains rare that they fail laboratory testing with a major defect identified. And it is not a surprise when you have a category of products so carefully watched. Those that don’t pass often feature additional elements such as glitter or decorations that might be flammable.

“Knowing more about the rigorous testing of candles is the first step in improving consumer safety when it comes to lighting candles at home. But while these tests and quality controls are there to protect against potential defects or hazardous features, it’s up to the consumer to decide how they want to use them. The same goes for regulations. Consumers should be aware of what controls and guidelines are in place”.

After understanding more about the candle manufacturing and testing process, it might also prompt consumers to consider where they place them? Are they in reach of children or pets? Or close to a source that can catch fire, such as a Christmas tree? And what warnings if any are on the manufacturers’ instructions? Like we said, you’ll never look at candles the same way again.